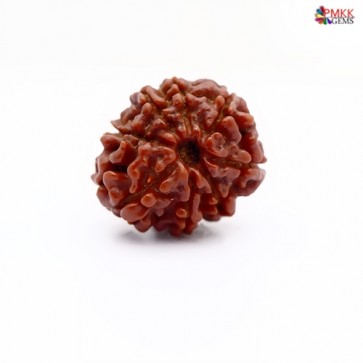 Be the first to review this product

As per ancient Indian scriptures Rudraksha is evolved from the eyes of Lord Shiva hence it's also called Tear of Shiva.In rudraksha we find Rudra means Shiva and Aksha means eyes. Rudraksha tree grows on mountains and hilly region of Nepal and India, Indonesia, Java, Sumatra and Burma. Its fruits are brown in color and sour in taste.

Rudrasha is fruit of evergreen tree, found in Nepal and some place in India. It have spiritual value in Hinduism. As per Vedas and Purans, its also have medical power that’s why it is widely use for cure many diseases in traditional Indian medicine. Yogis, Saints, Sages in the ancient India have had rudraksha beads on their bodies.

As per details found in the Purana there are fourteen kinds of Rudraksha, which are called Mukhi or faceted Rudraksha. There are deep lines found on the surface of the Rudraksha from bottom to the top hole and the number of these lines decides about the type or Mukhi Rudraksha and that rudraksha is called by the number of lines + mukhi or faceted.

It can be wear with silver cap in silver chain or alternate wearing in yellow thread. Before wear it mash it with un boiled cow milk and honey after that wash it with Gangajal. And put it into worship palace and chant "Om Hum Namah” mantra for 108 times.

Only registered users can write reviews. Please, log in or register